Tuesday, September 7, 2021
Today we will have a discussion on the (required) readings below and my lectures. Please email me 2-3 questions/points you want to discuss about the reading before class. See more information about how discussions work and are graded.

Can we plan an economy? We will cover the “socialist calculation debate” and its implications for development policy. I will lecture on Monday and part of Wednesday, and then we will hold our first discussion on Wednesday.

My lecture slides will contain a lot of quotes from participants, for a few reasons:

Questions to Guide Your Reading

This paper by Mises (1920) launched what is called “the socialist calculation debate” among economists across German-speaking, and later, English-speaking Europe. Throughout the 1920s-1940s, economists debated the technical mechanics of howa central planner might optimally run an economy. Socialist writers, agitators, and political parties emerged especially after 1840s I should make clear, the content of this specific debate was not ideological (though that certainly is in the background), but the very technical and mathematical mechanisms of how to replace the market process with state control to attain optimal outcomes.

We are doing this before we fully cover the market process and the role of market prices (next lesson), but the video linked to above (“What if there were no prices”) is perhaps the easiest to understand and best distillation of Mises’ argument I have ever seen.

Beyond a “capitalism-vs-socialism” context, this week’s lesson (which will be oft repeated this semester) is intended to make you hesitant to think you have “the answer” that you can just “give” to developing countries to get them to develop. The short Medium essay “The Reductive Seduction of Other People’s Problems” will get you to recognize how many assumptions we are making (and ignoring) about other countries problems and think we can just reduce them down to just one thing that we can fix.1 We remember how complicated things are in our own country, but think the problems in others are just so crystal clear and fixable. Lastly, the Planet Money podcast will show you the relationship between what we (think we can) control and what we can measure. It’s often like the drunk who only looks for his car keys under a streetlight because that’s what he can see.

Below, you can find the slides in two formats. Clicking the image will bring you to the html version of the slides in a new tab. Note while in going through the slides, you can type h to see a special list of viewing options, and type o for an outline view of all the slides.

The lower button will allow you to download a PDF version of the slides. I suggest printing the slides beforehand and using them to take additional notes in class (not everything is in the slides)! 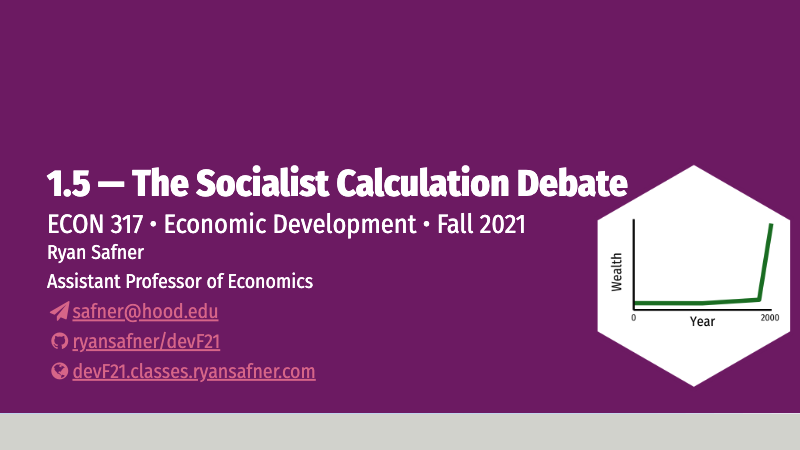