We finally begin discussing institutions and their role in economic development. First, we discuss some motivating problems of political economy, the knowledge problem & incentive problem, that different societies try to solve with various institutions. We discuss some of the more specific political-economic problem that must be addressed: that self-interested people will find ways to benefit themselves, even if it comes at the expense of others. What we would like is to create institutions and rules that channel that fundamental motivation into productive outcomes that benefit society, rather than outcomes that only benefit the person, and are unproductive or destructive towards society. In doing so, we contrast profit-seeking with rent-seeking, the latter of which can cause unproductive and destructive outcomes.

Chapter 1 sets the stage with a number of stories that emphasize the differences in inclusive vs. extractive institutions, primarily by comparing the colonization experience of the Spanish in South/Central America and the English in North America.

Questions to Read For

Below, you can find the slides in two formats. Clicking the image will bring you to the html version of the slides in a new tab. Note while in going through the slides, you can type h to see a special list of viewing options, and type o for an outline view of all the slides.

The lower button will allow you to download a PDF version of the slides. I suggest printing the slides beforehand and using them to take additional notes in class (not everything is in the slides)! 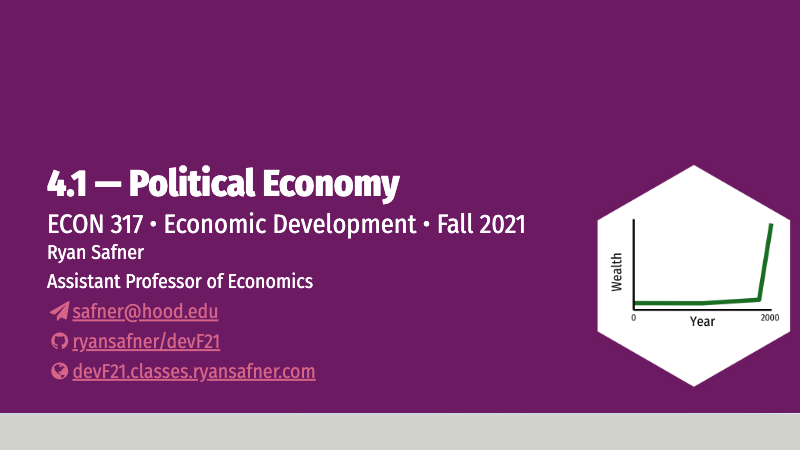